Anyone that truly works with hand tools knows the value in having sharp tools. Sharp tools minimises muscle fatigue and accidents that arise from frustration by unnecessarily over exerting yourself to get the work done. Handsaws are no different to planes, chisels, or any other hand tool. A mediocre sharpened saw works well, but super sharp saws like the ones from “Bad Axe” perform better than more modern manufactured saws. Admittedly, I have never tried a “Bad Axe” saw because I live in Australia, but I have read so many articles about its superiority and cutting speed that I have only imagined how fast it actually cuts until now. I have wished to pick Mark’s brain on what rake and fleam he uses that makes his saws so superior to the way other sawyers have sharpened their saws.

Today I found an old in FWW article on how to sharpen a saw on Mark’s website. I anxiously downloaded the article and read it slowly and carefully, making sure not to miss anything. When I finished, I was a little confused. I didn’t find any rake and fleam that he favours. In fact, it says to stick with the angle determined by the manufacturer. The only thing I got from the article was the stroke method he used. Medium, heavy, then a light finishing stroke he say’s. Making sure every tooth is of equal height and every gullet of equal depth. That’s it! That’s all he does. I pulled out my saw vice and a spare LN backsaw, which I intend to sell and sharpened it using Mark’s recommendation. Upon completion, I was surprised at how prickly the saw teeth felt. I put it to the test on some scrap pine and it just went through it like butter, then I tried some white oak which he recommended and it too sawed through effortlessly. I then pulled out my other backsaw sharpened by Lie Nielson and tried it sawing white oak with it, and it struggled. I had difficulties pushing it through the wood.. I nearly fell on my arse in awe of Mark’s expert sharpening technique. The rake and fleam I used was the manufacturer’s default of 15°. What I changed was the method of stroke as per Mark’s recommendation. Not only did it saw faster, but there was zero tear out on the back. Go figure that one out. I highly recommend you download this article, read it, and then give it a go. I guarantee you will never look, read or watch another saw sharpening video again.

One last note, use the recommended size files that Mark recommends. You can find other sized files on his website. Bad Axe Saw Sharpening Files by Friedrich Dick (badaxetoolworks.com) Take the time to read his articles, I’m sure you’ll agree them to be very informative.

As a general rule, new crosscut hand saws are not sharpened
properly . The trouble appears to be the result oHorming and
sharpening the teeth by machine, after which the teeth are
set . As these saws are sold, they feel sharp enough but they
don’t  t as well as they should and they tend to wander.

One can tell about this by looking along the teeth. 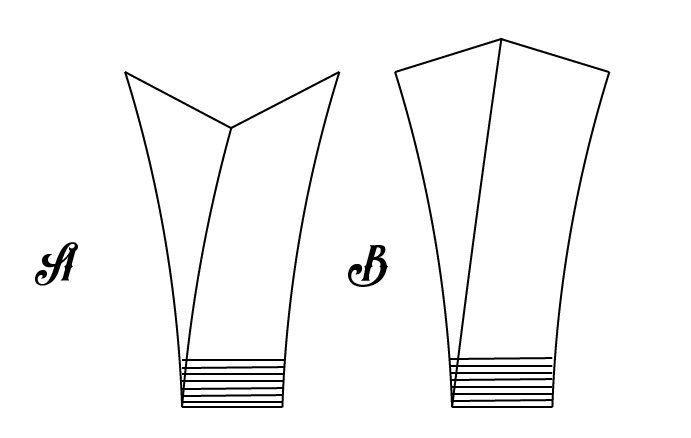 Sharpening a new saw to correct this is easy. It is well worth the trouble. Any set of accepted directions will do, just ignore those for levelling the teeth and resetting them.

Neither is necessary. The only trick is to make sure the teeth are at equal depth. Even, the saw cuts straight with no problem . Uneven, it wanders and cannot be held true. Count the file strokes for each tooth and don’t try to make each tooth perfect the first time. Give each, say five firm but not heavy strokes. Then, when all teeth are done, check the saw. If one needs more, they’ll all need it.  Carry on with the same number of strokes per tooth, maybe two or three if you’re close, until they’ re all alike.  You don’t need a saw vise or some other special tool. You do need a thinner file than you think . A couple of pieces of
heavy wood or plywood on both sides of the blade, the edges just below the teeth, and the whole put in any vise, will do and you’ll never again have to say you can’t saw a straight
line. Amazing how much time you can save using a hand saw, especially if you have a good setup table to use for the purpose instead of your fancy cabinetmaker’s bench, one with an
overhanging top so you can clamp a piece along the side of the table if you need to.

I was sharpening my small crosscut saw this morning it’s a 16 ppi LN 15° fleam and rake with a 3 thou set.  This is the first time I needed to sharpen since I first bought it a few years back as it isn’t my go to saw.  I sharpened it and put it to the wood and wham off it went to the left.  Why?  I thought, there was no need to set it as you do only after about half a dozen or so sharpenings.

So I ran a diamond stone along the offending side and still the same issue, now I was worried.  I ran the stone again and it didn’t fix the problem and I was none the wiser as to what I could do next.  There are no saw sharpeners who do it by hand where I live that I could get a second opinion and I don’t know anyone else besides Ian Wilkie in Brisbane whose number was stored in my old phone that was stolen from me.

My self esteem and confidence in my abilities to sharpen saws just plummeted, I felt helpless like a complete noob.

To explain what went wrong.

Now I know I said there is no need to set the teeth on the first half a dozen sharpenings but I only sharpened one side.  After realising that I then sharpened the entire both sides and used a sharpie to mark the teeth first but even then after all that it still drifted to the left.

It drifted because I ran the stone over it before a few hundred thousand times as I really lost the plot then.  Surprisingly I removed very little set despite how hard I pressed but here lies the key to the whole problem it was only set on side not the other and that’s why it drifted.  Upon realising that I set the saw on both sides using the highest number on the Somax.  It moved the tooth over just a smidgen but enough to make it track straight again.

I write this so you don’t blow an entire day trying to figure out what went wrong and how to fix it.  I devoured the internet hoping to find an answer and as usual you find what you don’t want, information that doesn’t pertain to the problem at hand including a naked chick at some pool now what has that got to do with sharpening.

Now this information is on the net and hopefully you can all refer to it when you fall into this same predicament as I did and hopefully never again.  Check off the above list and you shouldn’t have this problem.

An  entire day wasted but a a valuable lesson learned.