To cut a square rabbet one must set the blade parallel to the sole but even before one can do that you must ensure when sharpening you keep the blade at a consistent 22° angle because if it is not it is impossible to set the blade correctly.

Veritas has provided some set screw like in all their planes to return the blade back to its original position after sharpening, however as much as we would like these set screws to be somewhat of a set them and forget them type it easier said than done as these screws tend to move after heavy use and I’ve found that resetting them back to their position which means kissing the blade prior to sharpening to be a good practice.

However, setting the blade quickly parallel to the sole is anyone’s guess, I’ve have tried several ways to do so by making jigs for it and am still none the wiser.  Unfortunately setting it by eye alone is not enough only by putting the plane to the work and taking shavings with light taps with the hammer here and there will you be able to see whether or not you have set the blade accurately.  This can be a very arduous task and counter intuitive as well because setting the blade parallel to the sole isn’t really the most difficult part but having it protrude from the side of the plane by the thickness of a sheet of paper and having it parallel to the sole is what makes it frustrating.  Many of times I have often wondered about my freshly sharpened blade, after setting the blade and taking several test shavings whether I need to remove the blade again and resharpen it.  But Let me get on to some important points here.  The reason the blade needs to be protruded from the side is so the blade can get right into those corners of the rabbet, if the blade was flat against the side of the plane you would be creating steps in your rabbets which ultimately would lead to the rabbet floor slanting downwards as those step wold force the plane to angle.  The nicker too must be slightly proud of the blade as well.

In order to have a square shoulder the above mentioned must be adhered to, the inside face of the plane is not a reference face and must not touch the shoulder of the rabbet but the blade is what kisses the shoulder so that is the reason why the blade must be proud of the inside face of the plane.  The manual that comes with the plane stipulates that this protrusion must be the thickness of a sheet of paper but many out there believe that this isn’t the case at all in fact it can be a 1/16 or more proud.  I haven’t tested this theory out to know for sure but on my next sharpening I definitely will, whatever it takes to get that blade setup quickly to get back to work is the aim here.

The other issue of not cutting square rabbets is in the way you use the plane.  The front knob as pretty as it looks is an actually hindrance and should be removed prior to using the tool, your thumb should be pressing down just behind the knob at the beginning of the cut, then equal pressure downward in the middle of the cut and lastly on exit no pressure on the front of the plane at all just like you would with any plane.  Your fingers also should be placed on the fence and be pushing against the edge at all times, the picture below I found on the net shows how you should be placing your fingers and lastly you push with you’re the palm and not with a full pistol grip. 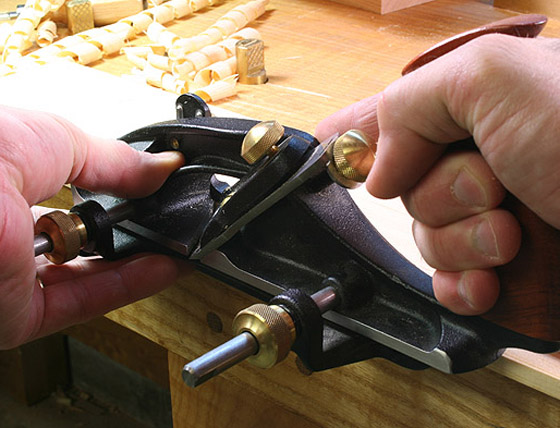 In the beginning it is quite a lot to think about but as you gain more practice with it, it doesn’t take long to get the hang of it.  Another thing comes to mind and that is the fence.  The fence that comes with the plane is rather small meaning the reference side isn’t wide enough to provide a good reference surface to maintain a square cut, fortunately Veritas has provided two holes in the fence where you can screw an auxiliary fence to it.  However, if you know your apron on your bench is square to your top this would aid you greatly but if it isn’t then regardless of all your setup the rabbet will not come out square so then you must use the edge of the piece you are working on which brings to another point.  Some people will have a very wide auxiliary fence but that width is wasted when it’s referencing off a 1” board thickness or less itself, unless your board is 2” or more thick having that wider fence will not provide any more stability in your cut than a 2” wide fence which is about what I use.  Having that size mean that sometimes you can plane rabbets in your vice but if the fence was wider obviously you couldn’t.

Another few more points and were almost done here.  It is a good practice to scuff up those rods and the rod of the depth stop as the fence tends to move whilst planning and that is not what you want, I would also do the same on your grooving plane as well and finally and I have to practice what I preach here is to glue up some timber to the bottom surface of the depth stop as it does mar the work.

One last important point I did forget to mention and that setting the width of the cut, many people set the fence to measure off the side of the plane that is a big no no you need to set the fence distance off the protruding blade because that is what comes in contact with the shoulder of the rabbet.

Veritas does offer both Left and right planes, unfortunately these planes aren’t cheap ad unless you can afford them buy the one that will suit you and if the work dictates the additional version then you’ll have to bite the bullet and fork out for it which in my case I will have to.